I compared two ATU-100s that use the same circuit board and software, but slightly different components.  The longer ATU uses silver mica capacitors and is built a bit more ruggedly, while the shorter ATU uses surface mount capacitors and includes a gratuitous 12V battery. 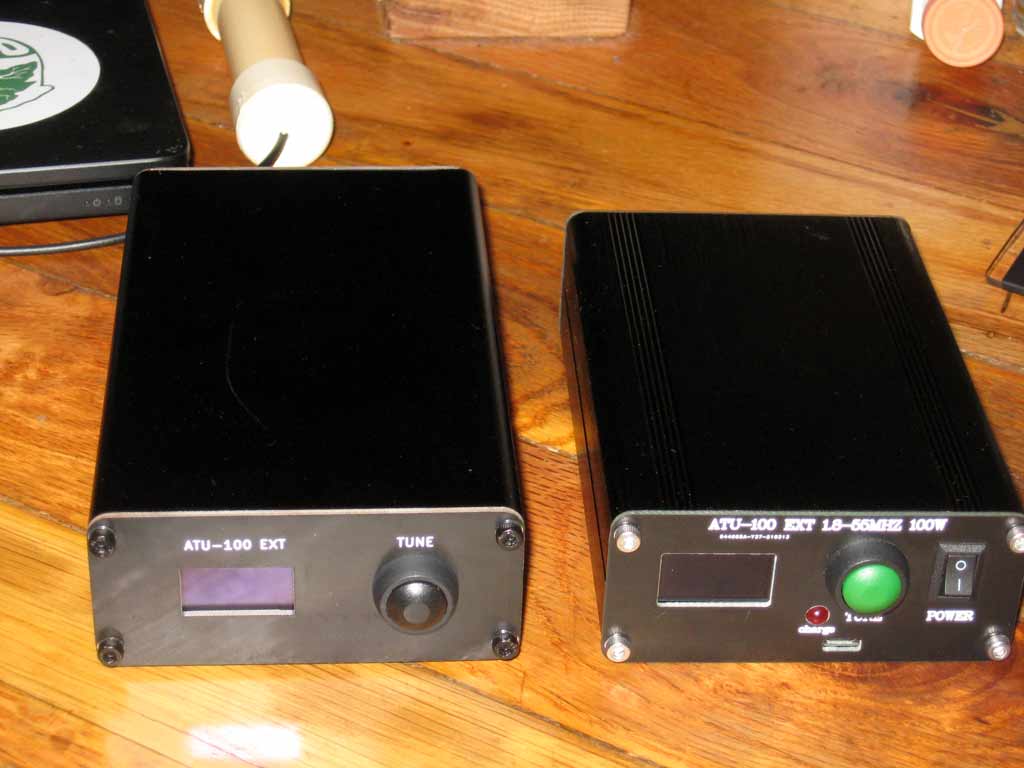 Both tuners use the same circuit board and display, but the shorter tuner includes a 12-volt battery and dc/dc converter to allow charging the battery with a 5V usb cable. 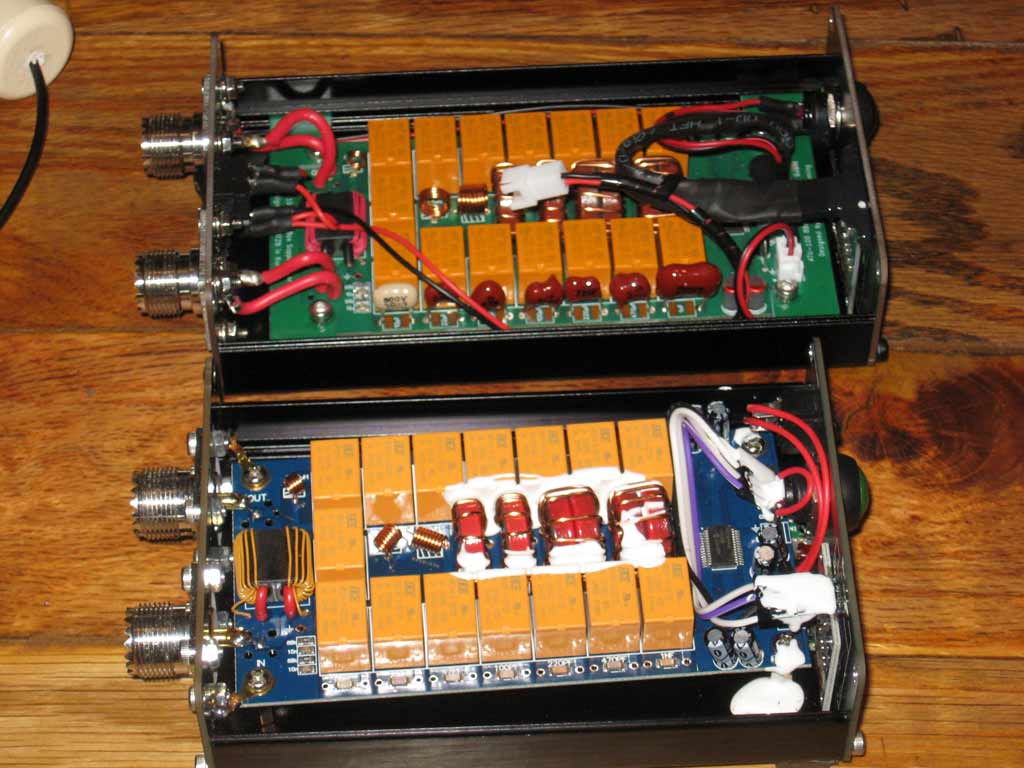 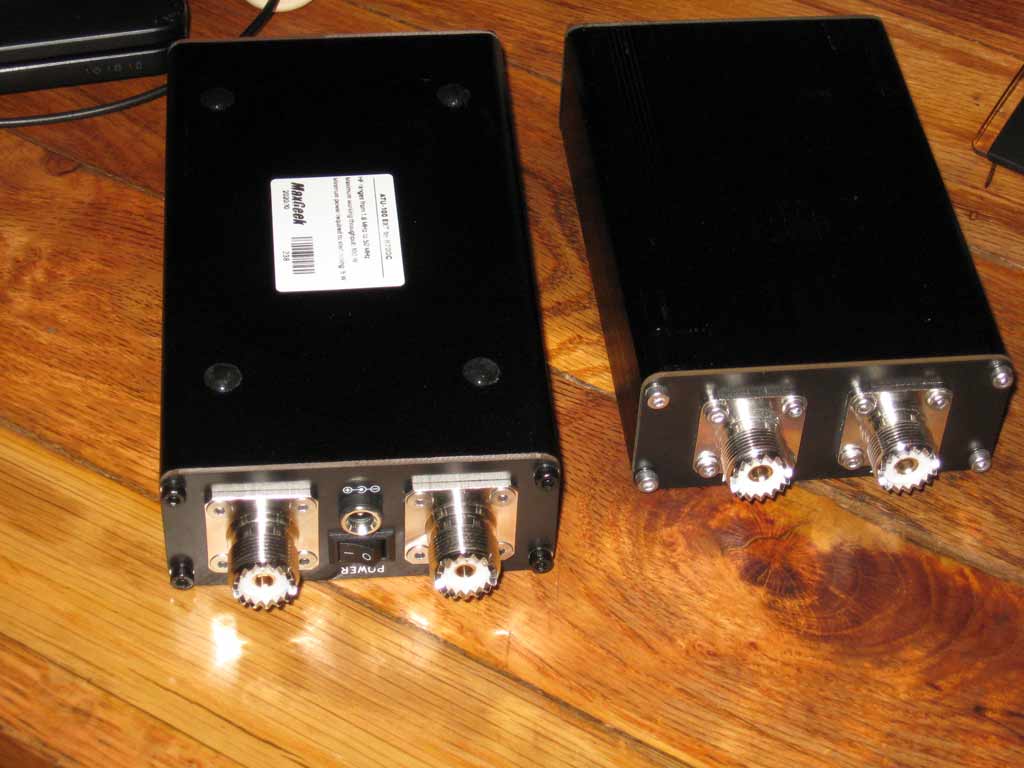 Standoffs on the longer unit are secured to the bottom and capped with small rubber-baby-buggy-bumpers.

I used a Yaesu FT-990 to provide 10 watts into a dummy load (as indicated both by the Yaesu and an external SWR/power meter).  Then I put each tuner between the transmitter and power meter to see what power levels each ATU would report (with the tuner in bypass mode – no inductance and no capacitance added). 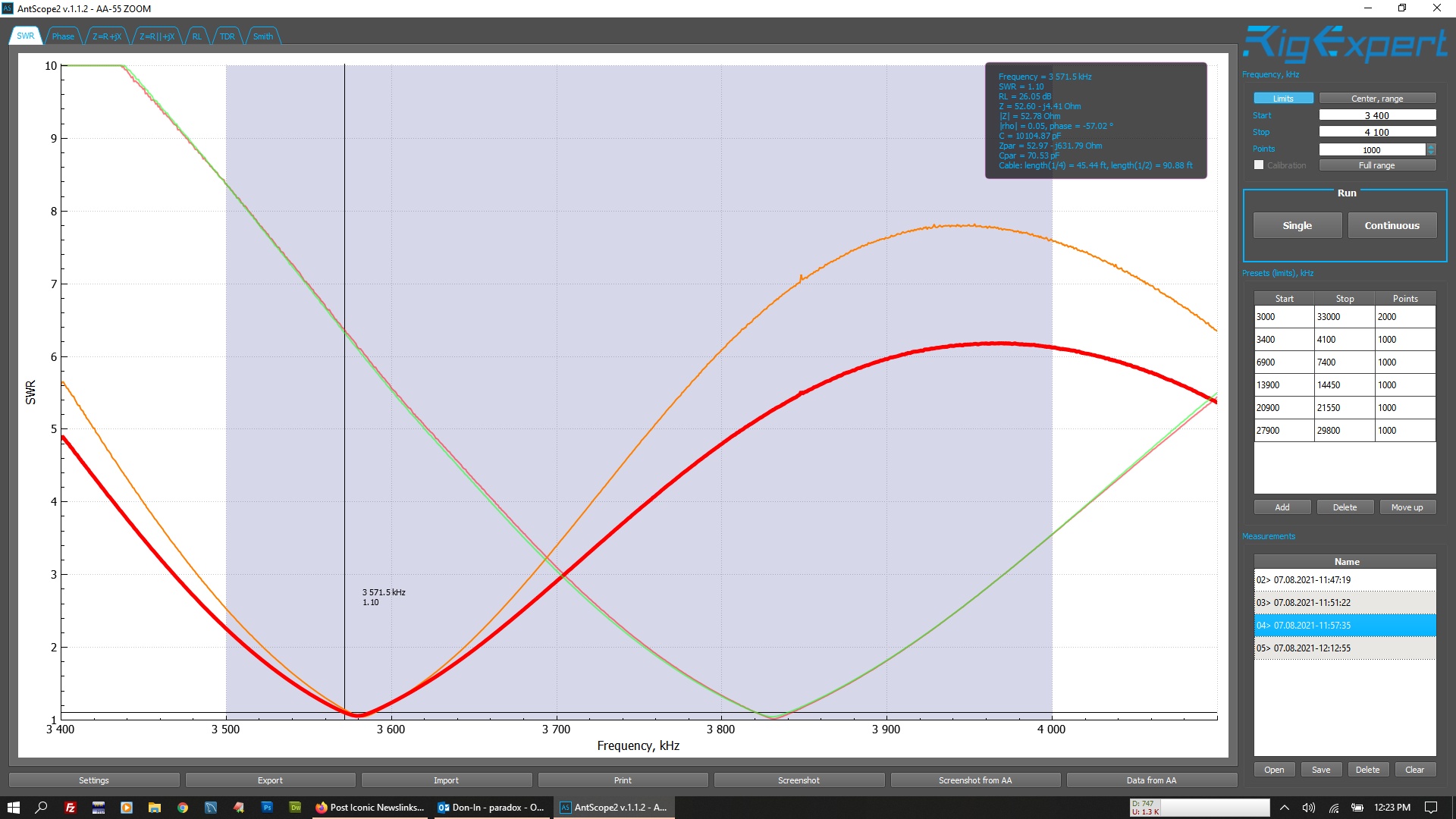 80 meter dipole normally resonant at 3831 KHz (green line). Red is the swr using shorter ATU to tune down to 3570 KHz, orange is swr using the longer ATU.  I’m surprised that the ATU using surface-mount capacitors seems to perform slightly better.  They both achieve approximately the same SWR dip near the transmitted frequency, but with slightly different inductance and capacitance (1320 pf and 2.82uh vs 1470pf and 2.2 uh).  Both units claim 52% efficiency at 3570 KHz.  The longer ATU was closer to the correct input/output power levels, but both units always agreed on the efficiency (even though the efficiency and power levels seem to be substantially incorrect when transmitting into a dummy load). 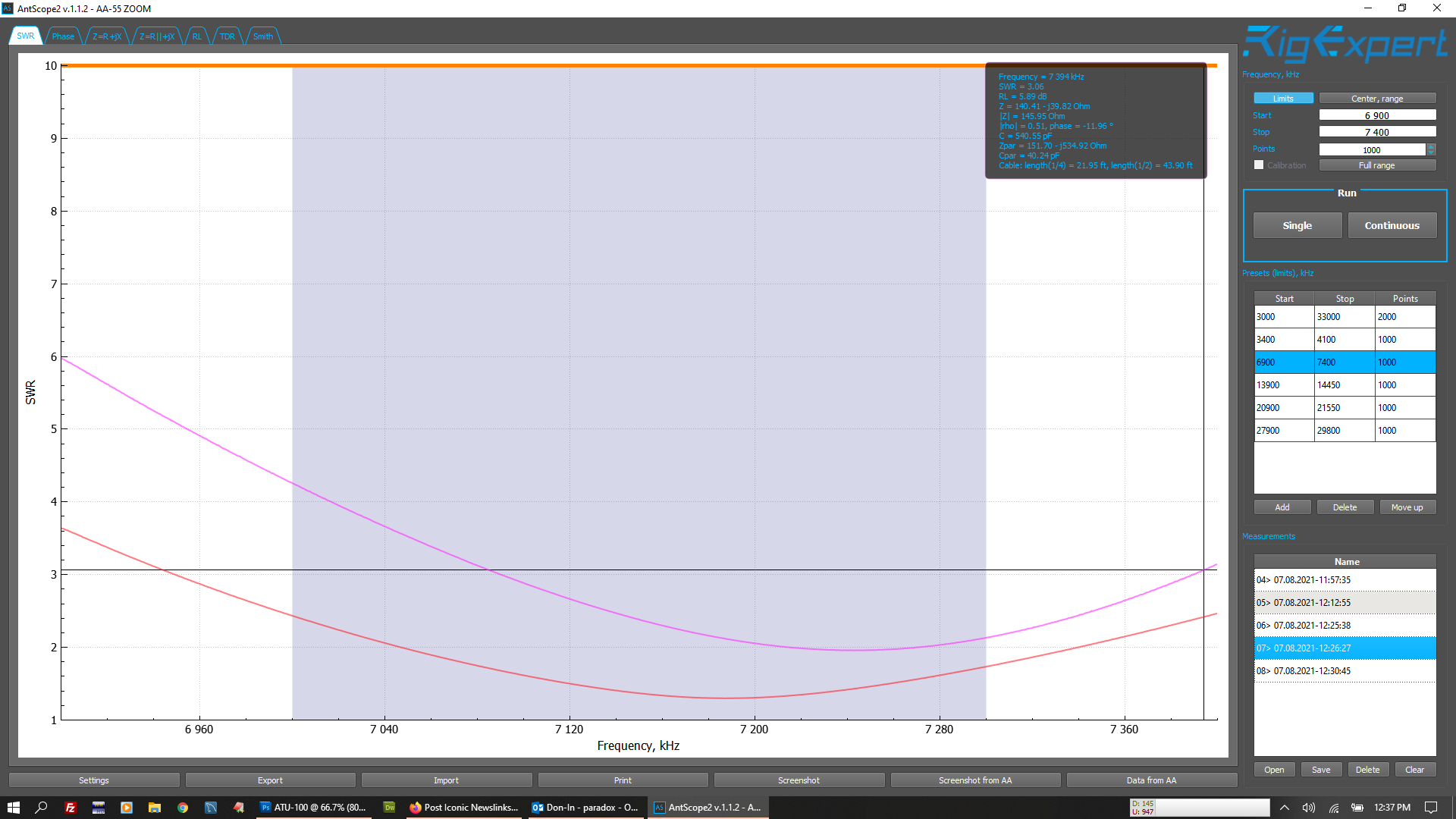 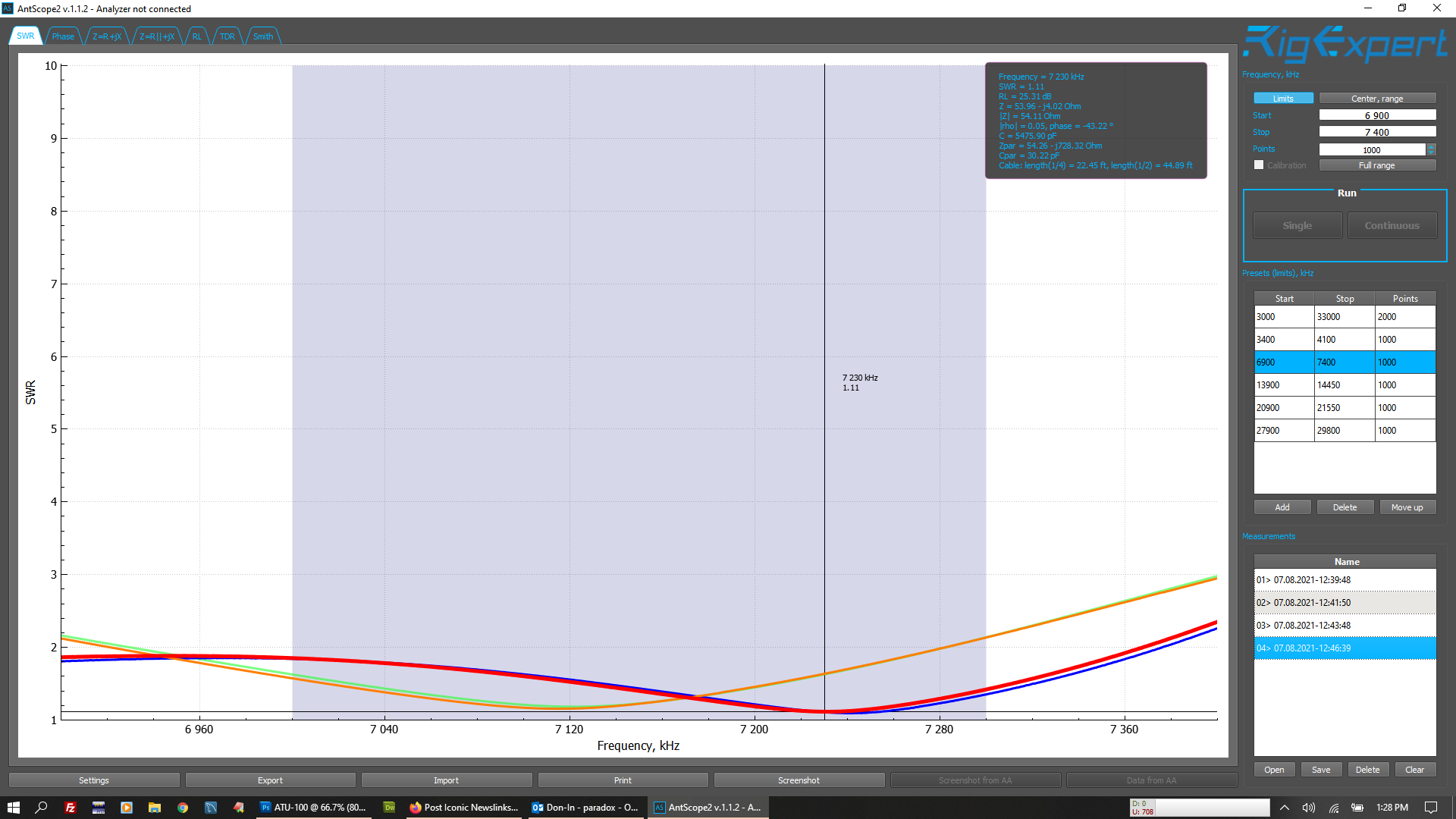 18-AVQ vertical. Both tuners perform about the same. Green and orange are the swr with each tuner in bypass (resonant at about 7110 KHz).  Red and blue are the short and long ATUs tuning at 7211 Khz.  Both units reported 77% efficiency (which is probably closer to 97 or 98% in reality).