Everybody hates the TPP — the Tran Pacific Partnership “free trade” deal. Conservatives hate it because of its assault on sovereignty, the way it hands over the rights to regulate in the U.S. to foreign corporations. Liberals and progressives hate the way it threatens labor rights, health and safety standards, and the environment.

Everybody hates the prospect of sending yet more American jobs to whichever country lets the companies pay them the least.

Nonetheless, President Obama is determined to get it passed before he leaves office. He’s doing a big public relations move, preparing to push it in Congress. But Mitch McConnell and Paul Ryan, Republicans in leadership positions, say they won’t put it up for a vote, because it “needs work.” Appallingly, what they mean is that it doesn’t give enough power to corporations. Specifically, it exempts tobacco regulations from the “right” of corporations to sue governments for lost profits, and it doesn’t let drug companies hold patents long enough, or force other countries to respect the monopoly granted by these patents (thus denying sometimes life-saving drugs to those who can’t afford the massively jacked-up prices).

So. Whatever your reasons for opposing TPP, can you rest easy now, secure in the idea that it won’t come up for a vote?

Don’t bet the farm on it. Obama has Fast Track in place and he looks to be intent on using it. All the talk about it being dead may be a feint to get the public to look away while they shove it through — and the lame duck session after the election is the best time to do it.

It’s the time of least accountability, when some in Congress who are either retiring or got voted out, can vote to please corporate interests and not give a rodent’s rear what you think about it. Then those corporations can reward them with cushy jobs. Even the reps who are still in place have at least two years before the next election, in which they hope the public will forget. Usually, when Congress wants to pass something that smells like a dead deer on a summer highway, they pick a late Friday evening, or a holiday weekend, times when nobody’s focused on news.

If you’re wondering what’s so bad about the TPP, it includes ISDS tribunals—Investor State Dispute Settlement courts, which allow corporations to sue any government that passes any rule they don’t like, anything they think could hurt profits — in cozy little private courts where three corporate lawyers are the judges and there is no appeal.

Buzzfeed just completed an investigation into the record of these tribunals. (Warning: Don’t read this before going to bed or dealing with children). Go to a report from the Institute on Agriculture and Trade Policy on why TPP would make it impossible to meet our commitments under the Paris climate accord.

There are worker protections in NAFTA and CAFTA, but the US government has only used them once, against Guatemala, seven years after complaints were brought to officials’ attention, and it will be more years before anything comes of it. Neither Canada nor Mexico has ever taken action, despite all kinds of labor abuses.

As for environmental protections, again, why are the environmental organizations opposed if it’s so great? Actually, it’s weaker than free trade agreements passed under George W. Bush. Environmental groups oppose it; the Sierra Club said, “The final TPP environment chapter fails to provide adequate protection in five of six environmentally critical areas, while doing nothing to strengthen an enforcement mechanism that has consistently failed to curb environmental violations on the ground.” It actually states that the US must quickly permit proposed LNG export facilities.

And, good for the economy? That’s not what the US International Trade Commission said in its report. Despite using the same models that projected rosier outcomes than reality in past trade deals, they said the economy would grow by a measly 0.15 percent over 15 years as a result of TPP, and the report estimates a worsening balance of trade for 16 out of 25 sectors that the ITC selected to feature. They estimate that the TPP will increase the U.S. global trade deficit by $21.7 billion by 2032.

So call your Congressman, and both Senators Manchin and Capito, and ask them how they plan to vote if the TPP does come up. Capito is the only West Virginia representative who voted for Fast Track, but that doesn’t mean she will definitely vote for the TPP — or that none of the others will. This time, don’t tell them why they should oppose TPP — ask them how they plan to vote if it comes up soon. If you don’t get a clear answer, call again. We need to put them all on record on this, now!

Mary Wildfire, of Roane County, is a volunteer with the Ohio Valley Environmental Coalition. 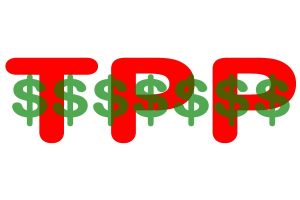