At a private luncheon today with stakeholders in WV’s water crisis, Governor Tomblin met with lobbyists and lawyers representing several out-of-state coal and chemical job creators to express his gratitude for their continuing support in WV’s time of need. Nibbling gingerly at unfamiliar appetizers while sipping champagne, Tomblin informally thanked each stakeholder for helping to lead WV to the brink of a new era of economic opportunity and prosperity that promises to be even greater than WV has enjoyed during his state government’s long term partnership with coal.

Tomblin also thanked the stakeholders for inviting him to the luncheon and marveled about the champagne, repeatedly noting ‘I like the way it tingles on my tongue.’  Tomblin went on to say ‘when life gives you lemons, West Virginians carry the heavy load, uuuhm, well you know what I mean…’   At  that point the entrées arrived and, according to our water-waitperson on the inside, little more was discussed till after the last breadstick was gone.  Tomblin waited till the traditional after-luncheon round of brandy and cigars to present his bold new initiative to the momentarily satiated stakeholders.

Tomblin, cautious as ever about appearances, perhaps still feeling flush from high priced champagne and his proximity to real power, took only a polite sip of brandy (while casually pocketing his cigar for later), then slammed a large cup of coffee made with bottled water flown in from Alaska before reading from a prepared statement:

“Recently, major coal chemical and coal slurry spills in WV have focused a spotlight on one of West Virginia citizen’s primary concerns: How do I know if my water is safe?  Today, few in Charleston or the surrounding counties really know if their water is safe.  Even the bottled water being delivered to schools has come under suspicion.

Currently there are only a handful of mom and pop water testing companies scattered throughout the coalfield sacrifice zones.  Now that citizens in our capitol city are aware of the crucial need for high quality water testing, these small rural companies will no longer be able to meet West Virginia’s growing demands for water-testing services.  Indeed, some citizens have already been forced to turn to scientists at local universities for help in determining if their water is safe, despite science’s well known unreasonable bias against coal and coal’s multiple waste streams. 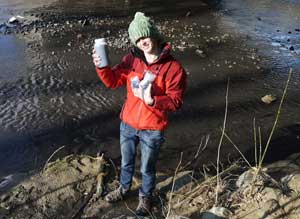 When I return to West Virginia after this luncheon, I plan to announce new tax incentives to encourage high tech water-testing companies to locate in West Virginia.  Besides generous tax breaks, my administration will look into creating water-testing enterprise zones in some of our nearly abandoned towns near large mountaintop removal coal mines.  To further hasten the development of West Virginia’s desperately needed water-testing resources, these zones will, of course, be exempt from compliance with burdensome safety recommendations or regulations governing chemicals used by the nascent water testing industry.

By taking the lead in water-testing technology now, West Virginia will be uniquely positioned to capitalize on the coming boom in water testing services and products.  As fracking, coal slurry spills, oil spills, coal ash spills and other Acts of God pollute more wells, groundwater, streams and rivers thoughout the country, the demand for water-testing service providers and in-home water-alert alarms (similar to smoke detectors) will increase exponentially.  As time progresses, more corporations and small businessees will realize they can increase profits and remain competitive by simply ignoring regulations and common sense till an Act of God, perhaps even something unlikely as sub-freezing temperatures during winter, dumps an otherwise costly waste stream into one of the rivers or watersheds that supply much of America’s drinking water.  WV could easily become the silicon valley of water-testing technology.

At this point one of the coal company lobbyists chuckled and, in the spirit of camaraderie West Virginia’s politicians have long enjoyed with coal lobbyists, wished Tomblin ‘good luck with finding much of a valley anywhere near an MTR site’, prompting a round of genial laughter among the group of friends.  If Tombin had more to read, he didn’t get the chance as most of the lunch eaters took advantage of the break to scurry off to their waiting jets. 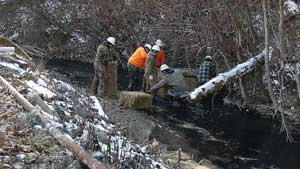