Mary Wildfire’s presentation from the Solar Open House at Hickory Ridge. A few pictures and other resources from the open house are here.

Why should you consider installing a renewable energy system for your home? Mostly, for me this is a moral issue: If you just go with grid power, in West Virginia virtually all the power comes from burning coal. This is a filthy, destructive process… in the mining, washing, transport, burning and coal ash disposal as well as being the worst source for carbon emissions. Natural gas and oil are similarly destructive of the local environment and the lives of those unfortunate enough to live near the sources, as well as contributing to smog and climate change in the burning. By getting your own solar panels—or windmill or microhydro turbine—you can stop contributing to this. It also puts you in a good position if the grid gets to be intermittent, goes down entirely or just gets too expensive for ordinary people—all of which I think are likely in the next decade or two. If it seems too expensive up front, you might consider getting just a couple of panels to supplement the grid—and give you a minimum if it goes down. You can always add more later, although an off-grid arrangement needs to be planned in advance.

So—you want to look into doing this. What’s your first step? Before doing anything else, figure out your current power usage and how you can reduce it. A couple of gadgets will help here—one is called the Kill-a-Watt, which costs about $25 in a hardware store or you can order it online. This plugs into an outlet; you plug in an appliance on the other side, and the readout tells you how much power the device is using. For something like a refrigerator that goes on and off, you leave it plugged in for a couple days. Then it will tell you how many hours it’s been plugged in and how much total usage it’s had, so you can calculate a daily average. A fancier item at around $100 is TED, The Energy Detective, which tells you which appliances are using how much power right now in your whole home. It’s worth the time and expense to use one of these, because the energy hogs may not be what you think they are. For example, there are a lot of “energy vampires” that suck a surprising amount of power when they’re off. Power strips can help here, as you turn off the power strip when you leave the room and everything is off.

Okay. Now you know how much power you use, and perhaps have found ways to reduce the amount. Next, you have some questions to answer. First, do you in fact want solar panels, or might wind or water be a better bet—or a hybrid system? This depends on your location and circumstances, but I can tell you that in most of West Virginia, wind is not a good option. We just don’t have enough. If you have a reliable creek with a good drop near your house, though, microhydro might be a good choice. I’ve only seen one such system—the owner ran the water through 500 feet of pipe to achieve a 47 foot drop, but this is more than you have to have. The drop need not be all in one place, but the pipe should not have hard corners or uphill stretches. On the plus side, water power runs 24 hours a day and is strongest in winter, thus making it a good complement to solar. But as with wind power, you have to use the power, you can’t use a charge controller. The home I visited had a heater on the wall for dumping excess power.

From this point I will assume your choice is solar. You now have to decide whether you want a grid-tied system, possibly with battery backup, or an off-grid system. A major consideration is whether you are already hooked to the grid. If not, and if it would cost a lot to get a hookup, you’re probably better off with an off-grid system. If so, the grid-tied arrangement is certainly cheaper, as you don’t need batteries or a charge controller. It’s also virtually maintenance-free—all you have to do is brush the snow off your panels in winter. The big negative is that if the grid goes down, so do you—no matter how many panels you’ve got in the blazing sun. A battery backup solves this problem, but costs more and makes for a complex system. Utilities all over, including West Virginia, are trying to get laws passed so they can increase the minimum charge to customers with solar panels, which could cancel some of the savings.

If you’re off-grid, these are not your worries—you still have power when the grid goes down, and the policies of the utilities should not affect you (although apparently Florida has made it illegal to be off grid). But your initial purchase will be higher, what with the charge controller and batteries; and the batteries are likely to need replacement before the panels (which are good for 25 to 40 years). The batteries need to be equalized every month or two, which involves checking and topping up their liquid levels. An off-grid home tends to have surplus power in the summer and barely get by in the dark winter, while grid-tied systems use the utility as their battery, and the credit for excess generation they produced in summer to get through the winter.

Another decision is whether to put your panels on your roof or in your yard. Despite the common term, “rooftop solar”—yard mounts are often preferable. For one thing, in our climate it’s often necessary to sweep snow off the panels; no power will be generated by obscured panels, and cleared panels in the sun surrounded by snow will really crank out the power as snow reflects lots more light. Standing below your panels with a push-broom is one thing; hanging out a window or walking on an icy roof in frigid conditions to clean off panels is quite another. Also, roofs leak a certain amount of heat, and panels are most efficient at low temperatures—they’re quite happy at January temperatures. And ideally your home has a lot of summer shade, so you don’t need AC and don’t need to use a fan a lot. That shade won’t suit your panels, but they can be a short distance away in full sun. Not having to walk on, or cut holes in, your roof are additional pluses to the yard-mount approach. On the other side, if you live in a city, a roof mount is surely less vulnerable to vandalism or theft. And you may not have much yard space; the best sun may be on your roof.

For a grid-tied system your panels are the main component of the system, with microinverters attached to each panel. The system is set up so your power goes right into the grid, and what you use comes from the grid; your meter runs backward when you generate more power than you’re using. With an off-grid system, power comes in from the panels and is managed by the charge controller; it slows down the inflow as the batteries get close to full, and stops it when they’re entirely full (otherwise excess would harm the batteries). There is one big inverter for turning the incoming DC (direct current) power into AC (alternating current). My house has both DC and AC wiring; we often turn the AC breakers off when a thunderstorm rolls over. Finally, there are the batteries. These are deep cycle batteries; you cannot use car batteries, which are not built to withstand repeated deep discharges. But the more often you let your batteries get very low, the shorter their life.

My final topic is cost. When we got our 880 watt system in 2009, we paid $9070 for all components—panels, charge controller, inverter, batteries, fuse boxes and wiring, everything. The same system would cost perhaps $2000 less now, because the panels in particular have come way down in price. But in 2009, we were able to take $2000 off our WV state taxes, a credit the legislature allowed to lapse in 2013. And we could take a full 30% off federal taxes, but this credit is due to lapse at the end of 2016, and there is no guarantee Congress will renew it (so get it done before the end of 2016!) Grid-tied systems can also take advantage of SRECs, in which they sell credits for renewable energy production to utilities in other states, but this doesn’t add up to a lot. There are now coops in Morgantown and Charleston, in which 20 or more households sign up at once and thus the cost of components is discounted. 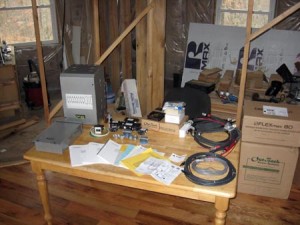