Editorial Note: This is Part 1 of Mary Wildfire’s series on false solutions to climate change. You can read Part 2 on Transportation here, Part 3 on Agriculture here, Part 4 on Buildings here. and Part 5 on Geoengineering here, and Part 6 on Real Solutions here.

Many discussions about solutions to climate change focus on switching from coal, oil and gas to solar, wind, and hydropower…maybe geothermal. But the generation of electricity is only about 20% of energy use. So even if we made a complete switch to those renewable energy systems, we would still also need transformations in transportation, agriculture, buildings, and the materials sector. We’ll go into each of those in separate essays, but we do need to note that the solution usually proffered for transportation is to electrify cars and perhaps trucks; some claim we could even electrify small planes. But then we’d need to generate even more renewable electricity.

Putting that aside, is it possible to switch all of our current generating facilities, now running on fossil fuels or nuclear power, to clean sources? We have to take into account that a sizable part of the human population still lacks any access to electricity, and most people feel that simple justice requires allowing them to increase their energy use to some decent minimum. Thus we need to replace maybe 125% of today’s generation capacity, to maintain current usage levels while adding this impoverished sector.

Right away we must deal with the notion that we must have endless economic growth; that any time in which a nation’s GDP has not grown is a bad year and something must be done; that a generation which does not have a higher standard of living than its parents has been ripped off. I’d like to just dispense with the eternal growth notion as being obviously impossible—as Kenneth Boulding said, “anyone who believes exponential growth can go on forever in a finite world is either a madman or an economist.” Yet to question it is considered radical; no politician dares to call for a steady state economy.

But even if we put aside the demands of mad economists and fearful politicians and call for the simple replacement of all of today’s generating facilities with renewable energy stations, with no growth and without adding more for electrifying transportation—is that possible? There are a number of problems. First of all, the one most talked about: the intermittency of solar and wind energy. If we assume that we must, at all costs, have available to us at all times as much electricity as we want, then we must build a renewable system with several times its nameplate capacity, so that there is power stored somewhere to make up for a place and time with no wind and cloudy skies. Storage options have improved considerably in recent years, but not enough to overcome this problem.

Before we look into the issues with the huge buildout of solar panels, windmills and batteries that a complete “Unplug/Replug” solution would entail, we must dispense, at long last, with the notion that we can solve the problem of carbon emissions from fossil fuels with…a fossil fuel. No, natural gas is not a “bridge to a renewable energy future”…it’s no longer cheaper to build new gas plants than the wind and solar plants that are supposed to be on the other side of the bridge, and there is plenty of evidence that when you consider all the methane leaks from gas, all along the supply chain from the well to the furnace, it is no better than coal in climate terms. Howarth and Ingraffea have done several studies on this question. And Oil Change International came out with a report suggesting that even if the leakage problem were solved, it makes no sense to build new gas plants.

Nuclear power is another sticky ball of wax, with many people clinging to it as a solution. It is much better than fossil fuels in climate terms. But no one has ever come up with an acceptable solution to the problem of safe disposal of radioactive waste. And nuclear power plants are subject to horrific accidents; potentially they could also create attractive targets for terrorists. And the supply of uranium is limited, and mining it is harmful locally. Some talk about new generation nukes that might not have these problems but there are none of these magical plants yet operating, and we need solutions now. The time it takes to commission and construct a nuclear power plant, and the expense, are more reasons to discard this idea. Further, nuclear power is not “dispatchable,” meaning you can’t quickly gear it up and down to complement intermittent solar and wind.

Another false solution is to go ahead and burn coal or gas but capture and sequester the carbon dioxide emissions. The problems here are that it’s more expensive, it’s unproven at scale, and this equipment makes the plant so much less efficient that you need to burn approximately 30% more coal to generate the same power—and you then have to deliver the captured CO2 to the site you hope will sequester it more or less forever. It would be a lot cheaper just to switch to renewables—and their fuel source is not going to run out.

However, it seems doubtful that we can just build enough solar panels, windmills, batteries, and high voltage power lines to replace today’s fossil fuel plants, even ignoring the proposed replacement of internal combustion cars with electric ones, and the growth demanded by mad economists. To begin with, production of solar panels, and the steel and other components  of windmills takes a great deal of energy; since only a small part of our grid is renewable now, the energy for this major construction binge must come from fossil fuels. Won’t this surge of emissions push us right over the line into climate catastrophe?

Let me dispense with the claim that wind or solar energy take more energy to construct than they’ll ever deliver. This is not true. But the massive buildout that would be required if we attempted to replace all of our current fossil fuel infrastructure with renewables is dangerous when we are already teetering on the precipice of massive climate feedbacks that could spiral out of control.

There are arguments that replacing the energy-dense fossil fuels with renewables would require an enormous amount of land. Then there is the problem of acquiring materials necessary to windmills (neodymium) and batteries (cobalt, lithium) and other parts (copper). Some of these materials are found primarily in a few places in the world; it’s speculated, for example, that the major lithium fields in Bolivia might have something to do with the recent coup. Cobalt comes just about entirely from the misnamed Democratic Republic of Congo—where it’s mined under horrific conditions, often by children. Thus, environmental and human rights abuses in the underdeveloped world may be paying for the perpetuation of a high-tech, energy-intensive lifestyle in the overdeveloped world.

Let us be very clear. I’m not saying that we shouldn’t build solar and wind power plants. In fact, we should be stepping up production. We have to be realistic about it, though. Attempting to keep up the current wasteful level of energy use and consumption (the current level in the “first world” that is) has unacceptable costs. We need to increase efficiency where we can, but we also need to face up to the end of a way of life which has never been very satisfying, and accept a lower impact. For example, we can choose not to wash clothes or use a lot of other power at times when there has been no sun or wind, living within ecological limits in harmony with the weather, rather than insisting that as humans we are entitled to ride above any limits. Consider–every generation in human history somehow lived without any electricity, until a mere century ago. It’s time for us to grow up, accept limits, and make plans that take everyone’s well-being into account. 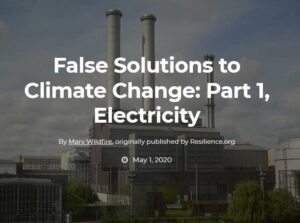