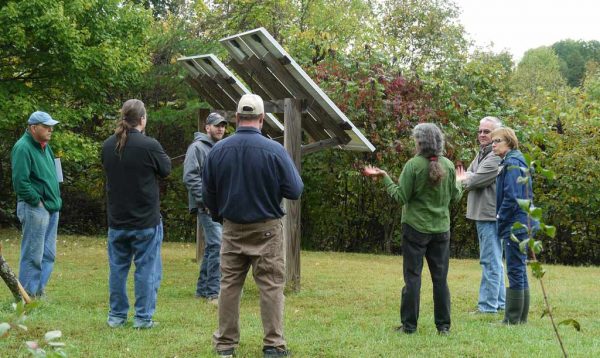 The second annual solar open house in Roane County will be held at 1 p.m. on Saturday, November 5 at the home of Bob and Jan Mertz on Mulberry Ridge. Many past students of Roane and Spencer High Schools will remember the Mertz’s, who taught in our high schools for many years.

The event will begin at one o’clock and will be held rain or shine. In addition to a tour of the solar panels on a hillside above the home, and the rest of the “grid assisted system”—inverter, charge controller, batteries—the Mertz’s will also show visitors some of the other features of their sustainable homestead. Bob made his own cider press, for example. The Mertz’s also tap maple trees to produce their own maple syrup, and graft fruit and nut trees for improved qualities. They do a lot of canning and of course have a large garden, with a gravity-fed irrigation system. 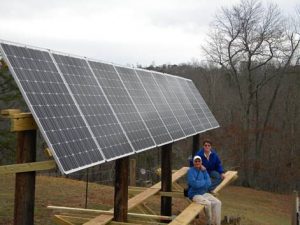 Bob and Jan Mertz and their solar array.

Last year we had a similar event at the Hickory Ridge Land Trust, where 40 visitors had the opportunity to examine both Robin and Brenda Wilson’s grid-tied solar electric system and the off-grid system of their neighbors, me and Don Alexander. Among the visitors on both days were Bob and Jan Mertz, who are OVEC members, as are the Wilsons and Don and I. Now they have their own system, which is not quite like either; they have parallel grid and solar systems. We also know of another household in Kanawha County that added solar after attending last year’s open house. Our fondest hope is that someone who comes to this year’s event at Bob and Jan’s house will be inspired, and instructed, enough to put in their own system—and perhaps host an event in 2017.

Coffee and snacks will be available. Bring good walking shoes and, in the event of rain, an umbrella. For directions or other questions, email Robin Wilson at robin@wvcag.org or me, Mary Wildfire, at wildfire@spectrumz.com. Please do not rely on GPS or Google Maps to get you there, as they are unreliable in our area, and there is no cell service near the Mertz home. 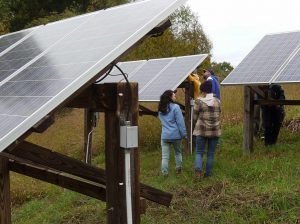