Certainly those suffering the harms here are generally low income, whether we’re looking at mountaintop removal coal mining, chemical company pollution, or the new shale gas wells with their multi-acre well pads and major industrial impact. But I would argue there is another dimension; what if we define the harmed and benefiting groups geographically? Most people affected by fracking operations, here and in other states, live in rural communities. This explains why there is not more resistance despite the myriad harms and despite the large area affected. If you look at a map of shale “plays” in the US, you immediately see that while quite a large minority of the map is colored with one shale region or another, few are near the major population centers. Thus a relatively small percentage of the American public faces a likelihood of impacts from “fracking”… and perhaps many assume they benefit with cheap gas. And maybe they do–but the producers are hoping to export much of this gas for the higher prices they can get abroad. Thus there are now battles over proposed pipelines and export facilities, as well as the well drilling and fracking.

Until and unless the gas ripped from under our homeplaces here in West Virginia gets exported, it does benefit people in, say, suburban Maryland. Which leads to the question: Is it fair that they enjoy the benefit of natural gas remaining cheap while poorer people on this side of the mountains see their homes rendered unlivable, their water made unsafe, the air polluted, and their once quiet, friendly, rural communities turned into divided, noisy industrial zones? Is it right that city people need not be bothered with any lifestyle change, any conservation… and politicians pocketing money from gas and oil companies continue to ignore the complaints of those harmed by these new extreme extraction methods…MTR coal mining, shale gas drilling and horizontal fracking, tar sands mining, deep sea drilling?

Some will argue that there are local benefits to the drilling—the jobs of course, and some money that goes to local governments. Two problems here; one is that I hear over and over, from people living in the impact zones, that a quick check of license plates around any fracking site (or MTR mine) shows cars from Oklahoma, Texas, the Gulf Coast—there are jobs, all right, but not too many going to local people. The other problem is that the guy with the job may benefit, but does that help the person forced to sell at a loss because their livestock are dying, or their kids are sick? Some people make money leasing their land to drillers, but most of us don’t own our mineral rights so we get no benefit, and have no say.

And now I’m going to argue that, in benefiting some and harming others, the worst environmental injustice of all goes beyond unfair disparities in terms of race, income, and geography. What about the victims who have no say at all? I’m referring to two groups here—those on the other side of species lines, and those on the wrong side of time. For the first I mean such things as the whales and dolphins threatened by seismic testing in advance of oil drilling off the Atlantic coast, or the life in upland creeks buried under valley fills.

By “those on the wrong side of time” I refer to the people who will live here when we’re gone. Will they have clean water to drink and use, and will the land be fit to farm? Will the hills be clothed with healthy forests? And, whether they live here or elsewhere, will the impacts of all this extreme energy extraction cause climate change that violently disrupts everyone’s life? And, given that the gas is likely to run out a lot faster than the producers or the media are admitting — see David Hughes’ report — will they have access to any form of energy beyond muscle power and fire, or will we have blown all the accessible fossil fuels out our smokestacks and tailpipes in a last, frantic orgy of consumption? We can use the last of the fossil fuels to build the renewable infrastructure that could, on a more modest scale, replace them—but if we wait until they’re just about gone, it will be too late. It takes a lot of energy to build solar panels and windmills, and we don’t have enough of them yet to power the building of a sufficient renewable energy infrastructure to power its own replacement. So if we don’t embark on a serious program now to divert some of the fossil fuels extracted at such cost into that program, our children will live on a hotter, more unpredictable, sometimes dryer and then flooding, more disease-prone world wracked by scarcity, without any energy sources the ancient Romans wouldn’t recognize. Talk about environmental injustice! 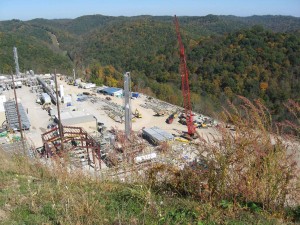