FERC, the Federal Energy Regulatory Commission, is the kind of regulatory agency any industry would love.

In another blog post, I talked about the way FERC does environmental impact studies, so there is plenty of detail but within a framework that ensures that all proposed projects will be approved.

But much more sweetness is in the arrangement for the companies that are “regulated” by FERC. It’s FERC that gives companies the power of eminent domain, so they can seize whatever land they want, no matter how much the owner objects. This is justified with the idea that the land for the pipeline is serving a “public need.” But some studies have shown that existing pipelines are not being used to capacity—they’re only about half full, nationally and in our region. So, why do we need new ones? Sometimes, perhaps, to send the gas to more lucrative markets, including export—in recent years exports of gas from the U.S. have skyrocketed.

Proposed pipelines from our area extend northward to export sites into Canada (Rover), southward to likely export via the Gulf (MXP and GXP), and eastward via the new Cove Point facility in Maryland (MVP and ACP). Are more lucrative markets, often in other countries, a “public need” sufficient to justify dozing a trail in someone’s backyard? (A whole lot of “someones,” and organic farms, and convents, and sanctuaries…)

And yet, there’s more—the biggie. When FERC grants a certificate to one of these projects, they authorize the company to recoup all of its costs from its ratepayers…plus 14 percent. That’s a pretty nice profit margin, and it’s guaranteed! Why not build a new pipeline you only might use, if the billions in costs are all gravy to you; if the financial risk is borne by your customers, and the environmental risk is borne by the public? For that matter, if you’re an investment bank, why not fund these dirty projects, knowing they’ve got a built-in profit coming? Many of these projects involve one company showing “need” by pointing to a deal it signed with a subsidiary.

A good piece on all this is “Pipeline Payday: How Builders Win Big, Whether More Gas Is Needed or Not” By the way, according to this, energy companies also don’t have to pay any federal taxes!

It’s my view that this outrageous cost-plus deal for gas companies ought to be a prime target for us, as we try to defend our green mountains, our clean—or less clean— rivers, and our quiet communities from this industrial onslaught. Surely if the gas companies, pipeline companies, and funding banks had to risk their own money, they’d be more cautious about investing in what might well become stranded assets—not only because of the possibility that we will actually at long last do something about climate change and other environmental crises, but because they seem to be overbuilding, because the profitable gas may run out sooner than expected, and because the competition from renewables keeps getting keener. And, surely, our attempts to talk banks into divesting would be much easier if they were taking the normal risk.

The Natural Gas Act says FERC has to respond to appeals of their decisions within 30 days—but they routinely issue “tolling orders,” in which they grant themselves extensions, often for months, while allowing construction to go forward. By the time they consider the appeal the project may be complete. In late August, a Washington, D.C., appeals court ruled that FERC wrongly failed to consider and estimate greenhouse gas emissions from the proposed Sabal Trail Pipeline in Florida. But the pipeline is already complete; gas is flowing through it. Presumably, it won’t be shut down—although it’s only at 25 percent of capacity, with Florida customers paying more than they would have with existing pipelines that are seeing reduced flow as the utility uses its new Sabal Trail pipeline instead.

In another case, FERC allowed eminent domain to the Constitution Pipeline across Pennsylvania, so they cut down three acres of maple trees from a family’s farm. Then, New York state refused to grant the water-crossing permits, halting the project. The company sued, claiming states don’t have the right to interfere once the almighty FERC moves its rubber stamp over their projects. I’m pleased to say an appeals court disagreed, hopefully stopping that project for good, as well as issuing notice that FERC can’t overrule every other agency.

Please join the fight to get a secure collar and leash on this destructive beast! Call us at 304-522-0246 or e-mail info@ohvec.org.

May 7 2016  Going Solar
Come to the Rubberstamp Rebellion: Ride with Us, Tell Off FERC 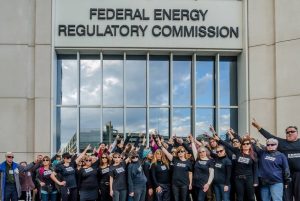