At a writers’ retreat on the banks of the Middle Fork River, a member gave us a delightful assignment. She handed each person a toilet paper roll core—the cardboard tube—and instructed us to fan out, each choose something to look at through the tube, and describe it. As a writing exercise, it was an excellent way to stretch our descriptive skills.

But as a way to study environmental impacts, looking at the world through a tiny close-up lens is not a good approach. Going over the Draft Environmental Impact Statement (DEIS ) issued by FERC (the Federal Energy Regulatory Commission) for the Mountaineer Xpress Pipeline, I kept thinking of that exercise—of people looking at the world through a small tube. In total, the DEIS weighs seven pounds. (This does include the Gulf Xpress Pipeline, which would take the gas from MXP’s terminus near Huntington, WV, on down to the Gulf of Mexico, likely for export.) Seven pounds, a thousand or so pages, at least a hundred charts. So, FERC’s staff must have quite thoroughly examined the potential environmental impacts of this project, right?

Yes, they did. There is great detail here…but the way they analyzed it seems designed to come to a pre-determined conclusion that the environmental impacts won’t be significant—or, or if they are, just throw some Best Management Practices (BMP) and other acronyms at the problem and everything will be fine.

People have argued that they need to look at cumulative impacts of the plethora of proposed pipelines, and they now do have a section on cumulative impacts. But it never looks at the big picture—they’re not looking down from a satellite or even an airplane. What they do is look separately at each category of impact (noise, soil disturbance, air quality, wildlife, water quality, safety) and then assign a distance for which, for example, noise impacts from two coinciding projects matter. Then they look at each spot where they identify two such impacts, and decide either that it isn’t significant or that it’s temporary so it doesn’t matter (except for damage to intact forests, which will hurt the cerulean warbler and other species that need intact interior forests, and there the company just has to adhere to BMP and XYZ and it’ll be okay).

They also put climate change under cumulative impacts. How do they deal with the huge impact of burning (and transporting, with associated leakage sooner or later) 2,700,000 dekatherms of natural gas per day? They dismiss it by saying they don’t know whether it will be used to capacity, and they don’t know how much fuel switching will be involved (i.e. will this new source replace existing coal or oil) so they don’t know how significant an impact it will have, so therefore it isn’t significant. In response to OVEC comments on this point, for the Final Environmental Impact Statement they state that they don’t believe it will increase drilling and fracking (based on what?) and that they “assume the gas will be used whether the pipeline is built or not” so therefore it doesn’t contribute to climate change (by this logic, nothing does).

They also don’t look at the need for all these pipelines comprehensively—they just decide each project is “needed” based on whether the company has a contract for the gas.

In 30 years, FERC has only rejected one pair of projects—an export terminal and the pipeline across Oregon that would feed it—and that was because the project had lost its contracts. In many cases, the company contracting for the gas is an affiliate of the one wanting to build the pipeline, so there is suspicion of self-dealing, given the guaranteed profits granted by FERC.

There is a mandated analysis of alternatives, including the No Build Alternative, for each project. But FERC doesn’t consider renewables or energy efficiency…they look at alternatives that would do what the project is intended to do, interpreting it narrowly as “deliver 2,700,000 dekatherms of natural gas from the Appalachian Basin” to some points between and to the terminus on the Gulf. If that is the criteria, then of course a direct pipeline between the two points is better than a collection of truck routes and existing pipelines. They take as the objective Columbia Gas’ stated objective—so how do they then conclude that the project fills a public need, which is necessary for FERC to grant the company eminent domain rights over whoever’s land lies along their chosen path?

Hint: 80 percent of former FERC commissioners go on to work for the industry, including the most recent one to rotate off, Ms. Honorable, who announced immediately upon her departure from FERC that she’s joining a legal firm lobbying for the Atlantic Coast Pipeline.

May 7 2016  Going Solar
Come to the Rubberstamp Rebellion: Ride with Us, Tell Off FERC 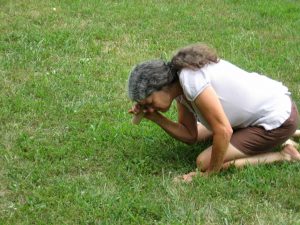