Editorial Note: This is Part 6 of Mary Wildfire’s series on false solutions to climate change. You can read Part 1 on Electricity here, Part 2 on Transportation here, Part 3 on Agriculture here, Part 4 on Buildings here, and Part 5 on Geoengineering here.

This has been a long tour through the Wonderland of fake solutions to climate change, ideas designed to splash a coat of green paint on Business As Usual so that certain private interests can keep getting richer…and so the rest of us need not be bothered with changing our habits or lifestyle.

This won’t do. The crisis we face, a crisis of which climate change is only the most prominent part, threatens to turn our world into a terribly impoverished place in which our grandchildren struggle for survival, a world marked by famines, endless conflict over resources, and periodic bouts of plague our failing systems can no longer contain. And a world where a great deal of biodiversity, the fruit of millions of years of evolution, goes extinct, lost forever—along with many cultures, most of them wiser than the dominant one causing the crises.

It really doesn’t have to be this way. We can’t smoothly transition to an economic system like what we’re used to, only powered by renewable energy—it’s too late for that. The resources have been wasted and the population is too high. But we could transition to a world where everyone has enough to live on, a world marked by international cooperation, but much less international trade. Relocalizing our economies and dethroning corporations are necessary elements of this transition. Necessary to ensuring adequate resources for all is a reduction in the “standard of living” of the richest half or so of humanity, including virtually everyone reading this.

We could supply all of Earth’s nearly eight billion humans with an adequate and varied diet, a shelter sufficient to provide comfort through the year, safe drinking water and sanitary arrangements, and basic healthcare. In other words, basic needs. But some of this would require a lot of people to move, as many areas can’t grow enough food for their current populations. Creating or upgrading shelters so they’re capable of keeping people in cold areas comfortable through the winter, and people in hot areas comfortable through summers, without continuing to burn a lot of fossil fuel or biomass, will require a major upgrading of buildings all over the world—a massive project which will provide a lot of employment but use a lot of resources. This is a more sensible use of the resources than building hundreds of millions of electric cars, though—a well-insulated building will require very little additional energy for many decades.

We need to phase out both the burning of fossil fuels and the splitting of atoms. Thus, in order to retain some of the comforts and advantages of modernity, we do need to build a lot more solar panels, windmills and batteries (and turbines for micro-hydro setups). Again, this will require the use of additional fossil fuel, so we simply can’t afford to replace our current huge system—First World people need to go on an energy diet.

Meanwhile, we need to transition from the sterile monocultures of modern agribusiness to regenerative agriculture. This means small farms run by families or groups of friends, each growing many crops, rotated frequently, in harmony with some native flora and fauna to keep pollinators and other insect populations healthy, as well as other elements of the ecosystems of which each farm is a part. It takes a lot of learning to pull this off, but it could be a rewarding career—if young farmers were allowed access to land and not forced to compete with enormous, subsidized cartels. Farms should primarily serve their local regions. Making changes such as reducing or eliminating tillage, eliminating poisons and chemical fertilizers, using lots of manure, compost, leafmold, etc., as well as mulch, and using carefully selected cover crops…doing all this can reduce the climate impact of the agricultural sector to something below zero potentially, as properly nurtured soil sequesters carbon.

The solution to the energy costs and climate impacts of transportation is not to merely change the details of our vehicles but to bring about a profound change to our city layouts and economies, to eliminate or greatly reduce commuting. We need to have livelihoods close to where we live, close enough to walk, bike or take public transportation. The changes in agriculture will involve a trade-off in which farms use much less fossil fuel and therefor need much more labor—this means a higher percentage of the population living in rural areas. But even urban and suburban places can grow some percentage of their food, and should.

In the long run, we need to lower our numbers. The fact that in one century nearly all the world’s land vertebrate population has been replaced by humans and our livestock shows that our trajectory is not sustainable.

I see a small change that could help a lot—imposing a high tax on advertising and using the proceeds to subsidize independent media. This should greatly reduce advertising, a relief to virtually all of us, and I think the result would also be a reduction in the drumbeat of conditioning to focus our lives around consumption.

A larger change we need, radical as this sounds, is to eliminate war. War wastes a tremendous amount of resources, hurts millions of people and their families—and is just plain stupid. Yes I know humans have engaged in war throughout human history. That doesn’t make it sane or useful. Humanity as a whole can no longer afford this waste of resources, and we need international cooperation that can’t come as long as empires are wantonly killing people in other countries.

The world we could have if we made these changes would be considerably poorer for the people currently at the top of the heap…or would it? We’d have often smaller homes, we’d travel much less, we’d own much less, we’d eat more simply. On the other hand, we could have the kind of community today’s Americans find only in their dreams—the kind of world where we know our neighbors and many of the people we pass as we walk or bike to work. We’d be healthier. We might have much more leisure time, and spend it in pursuits we find meaningful, with friends, rather than in frantic entertainment and travel. We’d have the satisfaction of doing our part to pass on a healing world to our children.

This kind of world will fail to make the rich continuously richer, so they will not allow us to bring it into being as long as capitalism and empire reign. Thus, real solutions to climate change—and the other crises—probably require revolution. But not the old limited kind of revolution involving violence and the replacement of the ruling thugs with some new thugs. We need a change much more profound, and much broader than that. 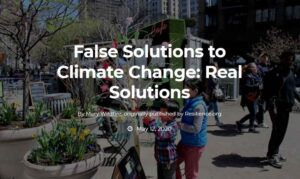