Editorial Note: This is Part 5 of Mary Wildfire’s series on false solutions to climate change. You can read Part 1 on Electricity here, Part 2 on Transportation here, Part 3 on Agriculture here, Part 4 on Buildings here, and Part 6 on Real Solutions here.

Geoengineering refers to proposals for solving the problem of climate change, not by mitigation—that is,  reducing emissions and deforestation, the causes of global heating—but instead by the use of new technologies. There are quite a few ideas out there for geoengineering, or “negative emissions,” but they all come down to one of two approaches. “Solar radiation management” means blocking some incoming sunlight so as to reduce temperatures on Earth, and “carbon capture and sequestration” refers to various means of sequestering carbon dioxide so it isn’t added to the overabundance in the Earth’s atmosphere.

All of the proposals have major risks. One they all have in common is the risk that governments, heavily influenced by big corporations, might be persuaded that an easy technofix is in the offing. This would reduce pressure to finally, at last, take serious action to reduce greenhouse gas emissions: mitigation. This is the obvious solution we’ve been evading for several decades now. Pronouncements by proponents of geoengineering almost always state that they aren’t intended to replace mitigation which is still necessary, but to supplement it because it no longer seems possible to reduce emissions fast enough. But one doesn’t have to be a cynic to see that any talk about magic solutions will be eagerly seized upon by those resisting the obvious solution that is anathema to powerful interests, especially fossil fuel, electric utility and agribusiness corporations. If you look at the projection by the IPCC of scenarios in which we keep emissions low enough to stay below two degrees of warming—never mind 1.5 degrees—all of them assume “negative emissions.”

So what are these technologies? Let’s take the solar radiation management category—SRM—first. Some propose to fly airplanes continuously around, spraying aerosols into the atmosphere to reflect some incoming sunlight, so the Earth warms less. Another proposal involves ships sailing the seas, perhaps run by robots, each emitting billions of micro-droplets of water sucked from the sea into the sky to form reflective clouds. There have also been proposals to paint roofs or roads or big swathes of desert white, and fantasies of launching a lot of mirrors into orbit to reflect incoming sunlight.

A big issue with any such plan is that SRM doesn’t actually reduce greenhouse gas levels at all; so if it is ever stopped—because the planes run out of fuel, or the unintended consequences cause conflict, perhaps—then the temperature would quickly climb to what it would have been if the technique had never been implemented, thus creating an even more extreme adjustment problem for species. It also does nothing to reduce the increasing acidity of the ocean, which threatens to wipe out most species there.

Furthermore, many if not all of these approaches will influence weather patterns. If they do, it won’t matter what the change is—someone will benefit and someone else be harmed. The Asian monsoon is a likely example. If India fails to get the monsoon and a neighboring country gets plenty of rain, millions of angry Indian farmers will accuse the other country of “stealing our rain.” Wars can easily ignite over such accusations, and the fact that the U.S. military is a chief funder of research into these approaches, and has discussed the possibility of using weather modification in warfare in the past, means such reactions would not be all paranoia. Given the unpredictability of weather, it would be impossible to tell whether a weather pattern with adverse effects on any area was caused by the geoengineering, or naturally; which means that if these gambits are put into effect, it’s pretty much guaranteed that someone will soon be screaming that they have been harmed by it.

Another two problems with any form of solar radiation management is that reduced incoming sunlight means reduced efficiency in solar panels, and in the photosynthesis which is the basis of both our crops and the natural food web.

Now let’s look at the other category of geoengineering, carbon capture and sequestration, CCS.

One form of carbon dioxide removal is ocean fertilization. The idea here is that the ocean absorbs much more carbon dioxide than either the air or the land, so why not get it to take even more? CO2 is absorbed by phytoplankton doing photosynthesis, so we need to get more sea plants growing faster, by fertilizing the oceans. Small experiments have tried dumping iron filings in the ocean, as iron is seen as a key limiting nutrient—but it didn’t work. Wrong place maybe. Turns out ecosystems are complex!

Afforestation is another proposal, but I have a logical problem with this popular idea. If it’s possible for trees to grow in a certain area, why isn’t it already forested? Surely because humans have cut down the native trees, whether for lumber and fuel, or to use the land for agriculture or cities. Unless we have a drastic loss of population, we will not soon need less land for such things. There are places trees can be planted, but I question the idea that we can simply calculate how much CO2 a tree absorbs, then multiply by how much we want absorbed and assume there will be someplace to plant that many trees.

Sometimes people talk about directly capturing CO2 from the air with machinery, either by collecting it from the smokestacks of power plants, or by Direct Air Capture (DAC) machines. The trouble with smokestack schemes is that they make the plants much more expensive, and reduce the efficiency so that it’s necessary to burn 30% more coal for the same amount of power. Since coal can no longer compete with renewable energy even where carbon capture and sequestration (CCS) is not mandated, this doesn’t look like a likely solution. As for DAC, the energy requirement to run plants to collect the much more diffuse CO2 from the ambient air makes them a non-starter. In either case, the collected CO2 must then be conveyed to a geological formation in which proponents hope it will be permanently sequestered. If done on a large scale, this would require a major new network of pipelines—it makes no sense to invest in such a major undertaking when renewables would be cheaper. What has actually been done with CO2 collected from pilot projects is to use it for enhanced oil recovery, in which it’s pumped into depleted oil wells to bring a last remnant up—obviously, we are not looking at reduced emissions here.

It’s telling that many proponents of geoengineering come from nuclear weapons programs, or thinks tanks that offered climate denial—until geoengineering came along, a technofix that had potential to further enrich the already wealthy. As stated in “The Big Bad Fix,” an 80 page explanation of geoengineering available for free download on ETC group’s website :

Avoiding efforts to address the root causes of climate change, and focusing on end-of pipe geoengineering technologies, is a political choice, not a destiny. It says that it is more acceptable to risk irreparable harm to our planet than alter the dominant economic system. It is not a technical or scientific necessity – it is a defence of a failed status quo that continues to protect the riches of the few.

I recommend “The Big Bad Fix” as a much more thorough look at geoengineering. Another good source is a book, Earthmasters: Dawn of the Age of Climate Engineering by Clive Hamilton.

Finally, consider that the opportunity costs of any geoengineering plan—that is, the economic costs, the materials and energy and manpower and environmental costs that would go into geoengineering—will come at the expense of a last chance to use those resources for the transition to a new, sustainable economy based on meeting people’s needs. 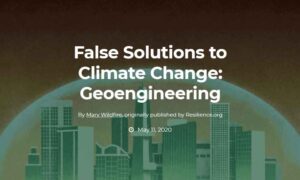