Editorial Note: This is Part 2 of Mary Wildfire’s series on false solutions to climate change. You can read Part 1 on Electricity here, Part 3 on Agriculture here, Part 4 on Buildings here. and Part 5 on Geoengineering here, and Part 6 on Real Solutions here.

In the US, transportation is said to be the largest source of greenhouse gas emissions.  The most common solution put forth is a false one: “we’ll electrify all our cars, maybe our trucks too.” Planes and ships are usually not proposed for replacement by electric versions, but trains are. So what’s wrong with this idea?

The main problem is that the reason transport is such a heavy sector in the US is that we do too much of it. Our cities, and our economy, are designed with the assumption that most people will drive to work; often families have multiple cars going in different directions to work or school every morning. Our manufacturing relies on an absurdly complex chain of just-in-time delivery of myriad parts from myriad places (a weakness made clear by the current situation with shutdowns due to coronavirus).

Thus to maintain the status quo, only with electric instead of internal combustion engine (ICE) vehicles, means replacing hundreds of millions of cars and trucks with brand new ones. But something like a third of all the energy used by a car in its lifetime is embedded energy in its manufacture. So retiring the ICE vehicles early wastes a great deal of energy. Creating an entire fleet of new electric vehicles would take a gargantuan amount of energy and materials…at the same time we’d be using a gargantuan amount of energy, and mostly the same materials, to create the massive replacement fleet of solar panels and windmills and batteries to replace fossil fuels…as well as the additional power plants to fuel this new fleet of cars. How can we do that without spiking greenhouse gas emissions way into red alarm territory?

As for the materials, the main problem with electric cars is the batteries, which require some rare earths. Few of these are actually rare, but they are currently mined in only a few places, likely because the mining process is environmentally and socially damaging. Researching this is difficult as there are widely diverging analyses, and I suspect many of the authors have axes to grind one way or the other. My conclusion, however, is that electric cars are almost certainly better in greenhouse gas terms than ICE vehicles…but not necessarily by a huge margin. Anyone who imagines an electric vehicle is pollution free is deluding herself. There is a social justice angle to this as well, since often the mines are in poor countries, where the pollution remains, and the miners are often exploited, often children.

The model for transportation which features freeways filled with eight lanes of cars rushing one way and another eight going the other, every day, has other destructive impacts. Quite a percentage of land in our cities is taken up by roads and parking spaces; our houses often feature garages almost as big as the house. A change in the layout of our towns and our working arrangements could allow us to walk or bike to work (and to school, to dine, etc.), freeing up space around our homes, schools and workplaces for gardens, and space along our roads for people to walk, bike, and meet up with friends at roadside cafe tables.

Ships have an obvious solution for cutting down or eliminating their climate impact—they can go back to using sails (perhaps modern design could make for more efficient sails). I saw a clip for the Tres Hombres, “the world’s only sailing cargo ship”—I think there might be a couple more now—and I think it’s wonderfully romantic.

None of these options move as fast as what we have come to call “conventional” modes of transportation. I have no problem with that. I do have a problem with the air pollution and climate damage of ICE vehicles, the enormous damage from the oil industry, the social oppression, the wasted space in cities and suburbs. Of course, some don’t have the physical capacity to pedal a bike, and people sometimes need to go farther, or haul too much for a bike to be feasible. But there are motorized vehicles with much less impact than American cars—from motorized bicycles to motor scooters to micro cars. The latter have the advantage of protecting the occupants from weather, but would not be legal in the U.S., or safe as long as they must share the road with two-ton behemoths.

So yes, electric cars are an advantage over ICE vehicles and a good choice if you’re going to buy a car anyway. But simply junking all our current fleet and replacing it with electric cars is not a solution. We need to be much bolder than that. 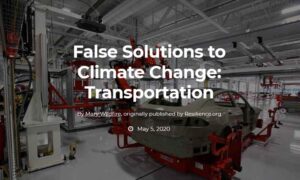